We just released our latest video we shot with Ubisoft, for their upcoming game that gets released tomorrow! Far Cry 4! We did one for Far Cry 3 almost exactly 2 years ago. You can watch that directly below.

We experimented with a bunch of new things on that one. Trying to film with a high quality camera, and use a green screen to put in the hands. We found out afterwards that we couldn't make it look as good as what was "ideal". We had originally thought about using a GoPro since we could strap the camera to the person, and that would tell the story really well, but at the time of our first Far Cry 3 video, the camera technology wasn't good enough, so we ended up shooting it on the Canon 5D Mark III.

Even though the video did really well, we had a backlash on comments saying they hated how we did the green screen effect on it. So we learned from our mistakes with the new Far Cry 4 video we did, and decided to do it with very little visual effects, and we made sure we stayed far from the green screen.

We filmed this video with the new gopro 4. In 4K, at 30FPS. We filmed it over two days. The 2nd day was made up of only filming the wingsuit scene since it involved traveling via helicopter. We tried to make the video look straight out of a "first person shooter" video game. We tried to mimic that as much as possible.

I had Jacob Schwarz produce this project. We actually worked on our first Far Cry 3 video together in Hawaii as well. So Jake did a bunch of research on how we could film with the GoPro and still have it stabilized, so it would look similar to the actual video game. That's when Jake discovered a gimbal made for the GoPro, and that's what we ended up using. Here's a link to that gimbal.

The process for this project started roughly 6 months ago when we knew we were going to be involved with this project. We began brainstorming with the Ubisoft team on ways we could incorporate what made the game unique, with things we thought our audience would like. The game features wingsuit flying, gyrocopters, and car chases, so we decided to try and throw in as much of that as possible. So I worked up a basic outline of how to incorporate all of that, with including one of the main characters from the game, Hurk. After that, we went back and forth with Ubisoft and making the story/video as strong as possible.

I then brought on Jacob Schwarz to the project, and he took it from there to carry out that vision. We were currently filming in Turkey and Nepal while Jake was getting everything ready. Once I got back, we filmed it, and deal with post production for a couple of weeks.

It was awesome working with Ubisoft again. They are one of my favorite companies to work with, and they have given us amazing opportunities to produce content that we are passionate about.

Without any further ado, here's the main video and the behind the scenes as well.

Here's our latest adventures from around the world. This time from Las Vegas Nevada!

Anytime that a new sponsor comes into the picture and would like to make a video with Team Super Tramp, there is always a rush of excitement and an anxiety of knowing there is more pressure behind these shoots as compared to the ones that are done with out a sponsor.  Most recently Team Super Tramp was given the opportunity to pair up with Citibank and do a promotional video for their new credit card.  The concept was fairly simple, take two ideas that typically wouldn’t go together and then combine them to make something epic! Where this is not a television or commercial shoot, Team Super Tramp was given the creative reigns and were encouraged to come up with a stunt that they wanted to do but had not had the opportunity to do up to this point.
That’s where the balloon rope swing idea was born. 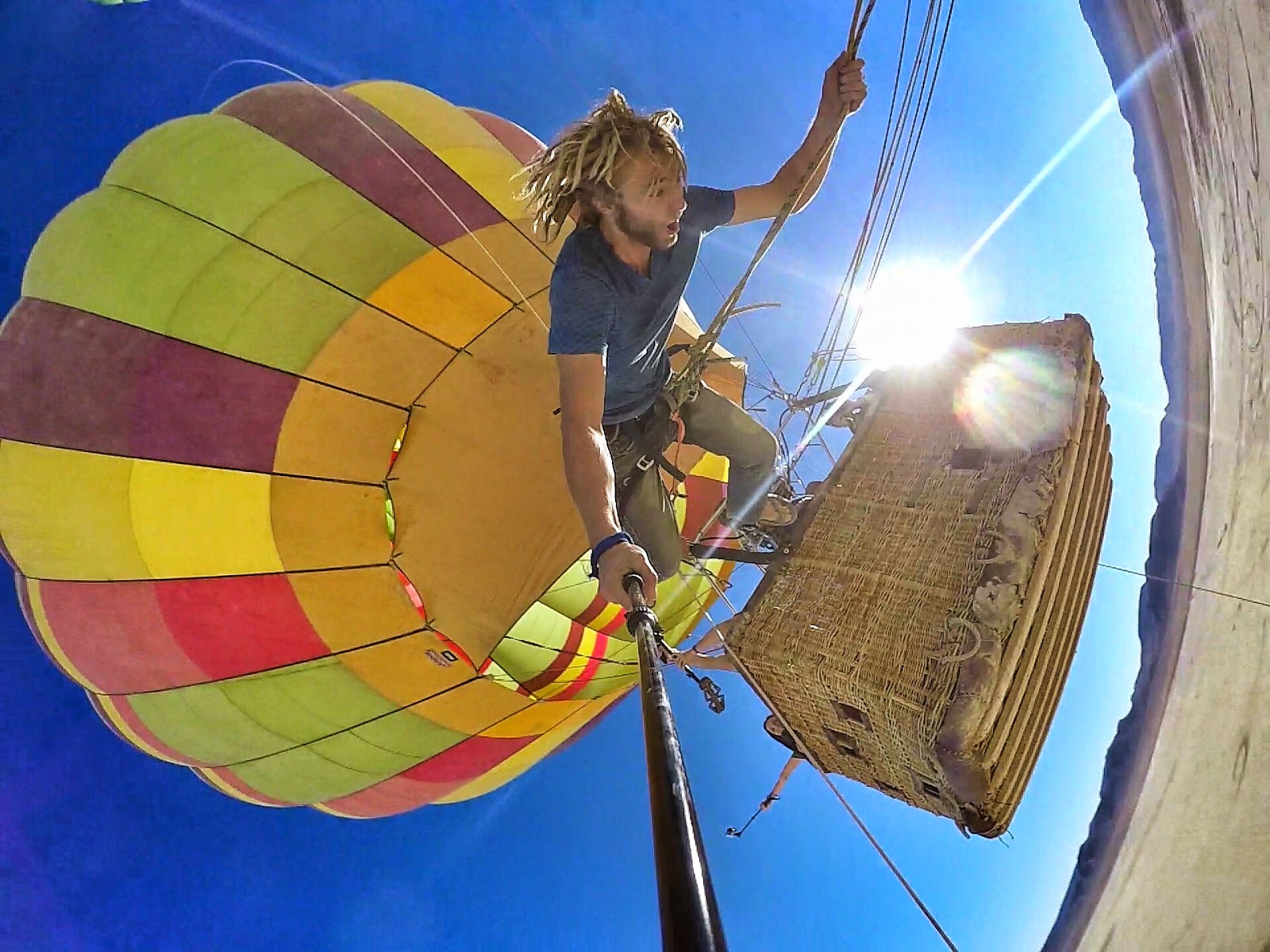 Though the original stunt idea was actually much different than what ended up being the final product. Originally, Devin Graham had the idea to do a Tarzan style rope swing, where the stunt people would swing from rope to rope underneath multiple balloons until the person would reach the last rope and drop into a lake.  The idea was fun and innovative, but after speaking with multiple balloon companies, it was found that the Tarzan swing just was not very feasible. Which then led to the second idea which was to drop from the basket of one balloon, swing under the other and then drop into a lake.  Both Team Super Tramp and Citibank loved this idea, so they decided to move forward with it. 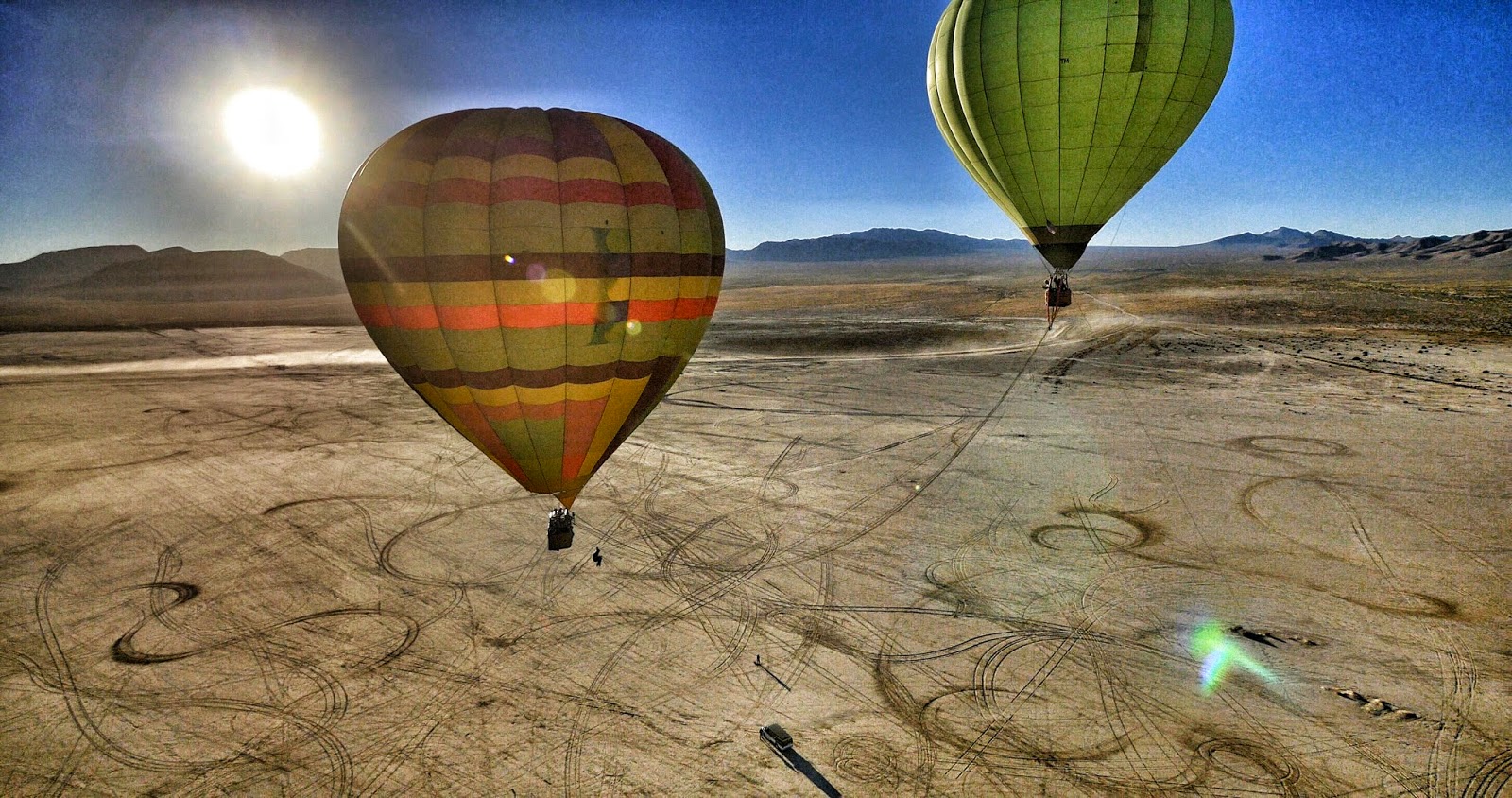 Seth Jones was put in charge of bringing this idea to life, but he was given a very short time frame to do so. (8 days to be exact) He started with trying to find a balloon company near their home base (Provo, UT) however, the weather was changing drastically from warm to cold and it became apparent after being turned down by every hot air balloon company in Utah that it was time to move a state over to Nevada.  There were a lot of hot air balloon companies in Las Vegas, and certainly at least one would want to be a part of the project.  So Seth decided to switch gears and set his sights on finding a location for this production to be filmed at.  When trying to find locations that have large bodies of water film on, a producer will typically look to national parks, state parks or BLM land.  However, when time is of the essence, getting filming permits on government land becomes nearly impossible because a lot of these national or state parks require a minimum of 14 days to process applications. And even after the application has been processed, there is still no guarantee that permission will be granted to film or do the stunt.  Seth was then put in a position to find a private lake near Las Vegas.  Seth is involved in the wake sports scene and after knowing that the Wake surf world championship was held at Lake Las Vegas, he know that would be the place to film.
After reaching out to some of the people who organized the Wake surf world championship, he was able to get in touch with the Reflection Bay Golf Course, who then agreed to let the team film there.  After finding a location the next thing to do was find a hot air balloon company who also wanted in on the action.  After doing some research, he was able to find Las Vegas Balloon Rides, one of the few companies who have been trying to progress what can be done with a Hot Air Balloon.  They were involved in a few previous stunts, including BASE jumping and Andy Lewis’ world record slackline it 6000ft.  Seth then contacted Doug and Las Vegas Balloon Rides and they were excited to be a part of making this dream come to life. 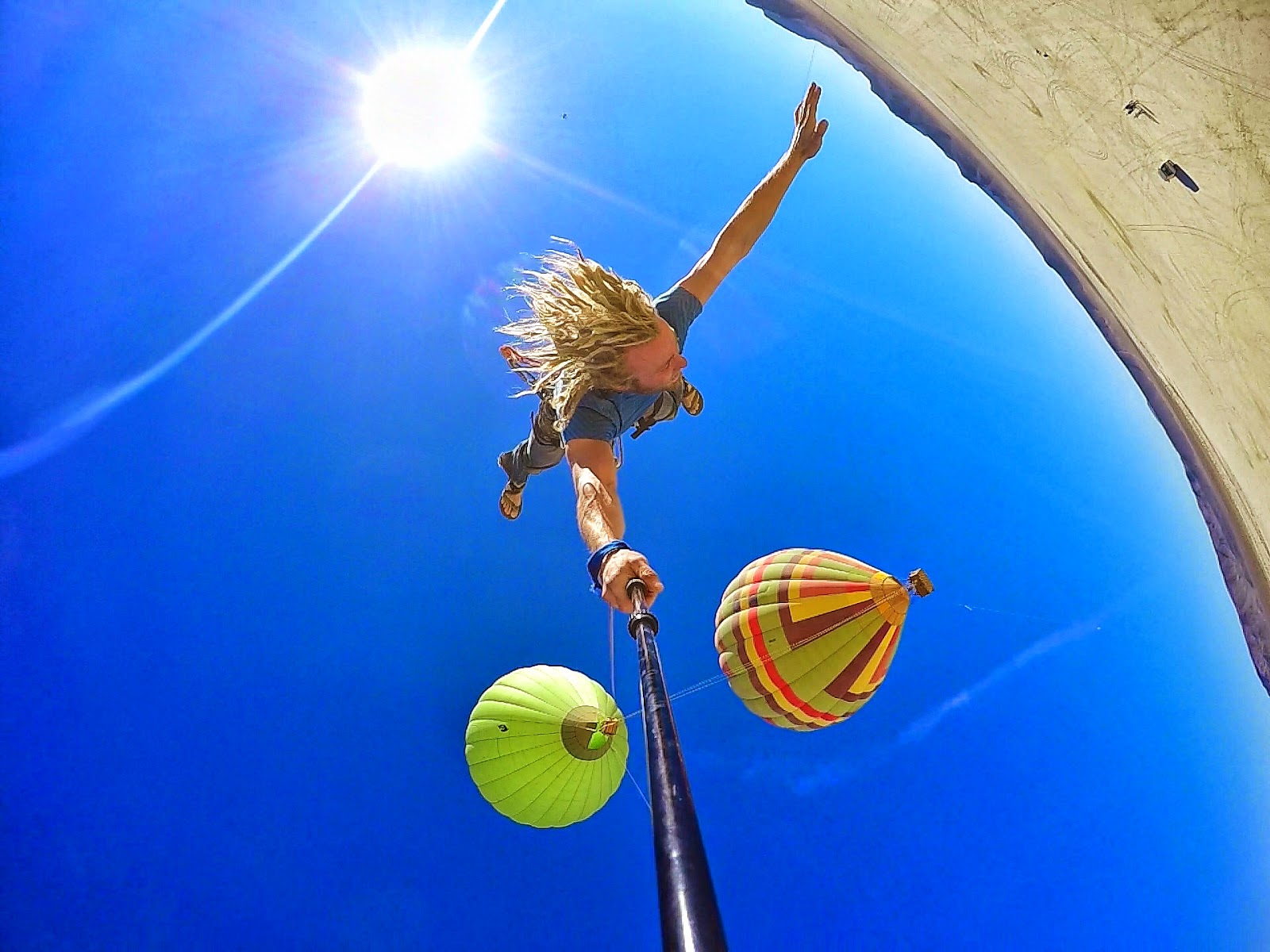 After doing a lot of organizing and getting people down to Las Vegas, on October 17 the team was finally ready to film the stunt.  However there was one major issue, the wind was not cooperating and the shoot had to be delayed.  The Team was hoping to be able to film a couple days later however, bad weather ensued and it was not looking promising to get the balloons in the air.  Devin, Parker and the rest of the film team also had to head back to Utah so that they could film the Far Cry 4 video (which will be coming out later this month).  Being on a time crunch with Citibank, the Seth and Devin were then asked to come up with a secondary idea to film just in case the first idea ended up not happening.
That’s when the Team decided that no matter what they were going to still combine ropes and Hot air balloons.  But instead of over water, they would move the stunt over land to a spot where the wind was more predictable.  On Tuesday October 28th, they gave the balloon over water stunt one last try, unfortunately the wind was again too strong to preform the stunt and the team decided to move on to idea number 2.  The first cut of the video was due Friday, so realistically Wednesday was a do or die situation. 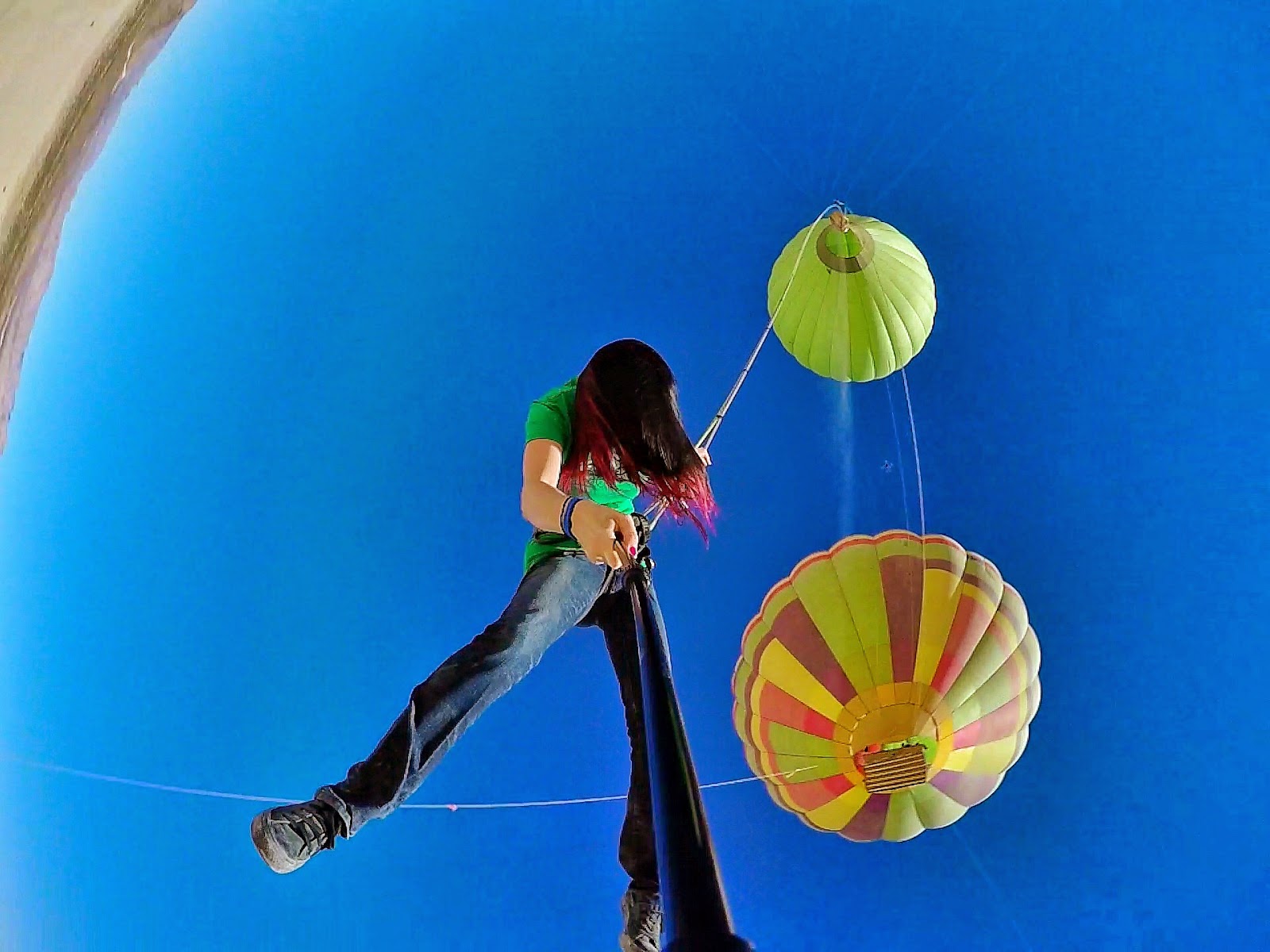 The next issue was to figure out how to rig the new swing over land as safely as possible, which required Seth and fellow riggers Creighton Baird and Paul Swindler to come up with a system which would allow multiple jumpers to jump from the same balloon but not require the balloon to have to go to the ground each time to retrieve the ropes for the next jumper to go.  They came up with a system that would make it possible for 6 jumpers to exit the balloon each on separate lines.  The system was made using 4 span sets, 2 3/8 shackles, 2 rigging plates, 2 steal carabineers and 12 ropes.  Each jumper would be attached to 2 ropes for safety reasons, and ropes were attached to jumpers directly into their harnesses using the standard figure 8 knot. (which is the most common knot used for climbing and other means of attaching rope)  All ropes used were 60m 9.8mm dynamic climbing ropes, which have up to 30% stretch.  The jumping lines where all roughly 150ft in length and after stretch usually made the ropes wing between 170ft and 180ft.
The morning of Wednesday rolled around and the team was finally met with no wind.  It was time for all the magic to happen!  The Balloons went up in the air and the first jumper was Creighton Baird. His jump went extremely well, which then led to 11 more jumps before the Hot air balloons started running out fuel and the shoot came to a wrap.