So less then 4 months ago from the original release date, the bike video hits 1 million hits today :) It's the first video on my channel to reach such a feat :) 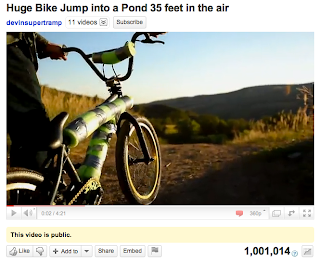 So, things have been going CRAZY on youtube for me these last couple of days! It all started with the slip and slide video I did getting featured on several huge websites, collegehumor.com, gawker.tv, gizmodo.com, smosh.com, gadling.com, bestofyoutube.com, front page of aol.com and even entertainment weekly :)

With all of these major websites posting my video, it has had a crazy impact on my youtube channel in general, not just the slip and slide video.

As a direct result of the success of the video I have been contacted by two ad agencies in LA, been hired by two different people who offered to buy the slip and slide video from me (I said no though because I want it to be exclusive to my youtube channel), and I've been contacted by a major record label in regards to my cinematograhy and shooting projects for them. And I've been hired as a cinematographer here in Hawaii for a project that will play on TV. So yeah.. All this is a direct result of youtube, and the effect that viral media exposes people to the world, and gives them a chance to compete with Hollywood/the big dogs.

With all this publicity, it's also sky rocketed my subscribers on my youtube channel.. before I was averaging around 75-100 a day, it has now gone up to 550 subscribers for the last two days consistently :) Of coarse I know it wont stay like that, but it's a good reminder that it can be done :)

Here's a graph of a website that keeps track of my youtube stats to show how things are growing on my channel. 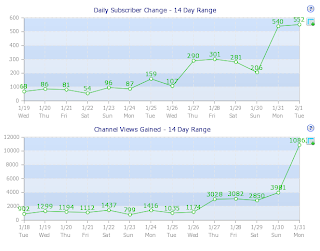 Also with other good news of what happened this week...

Great things are happening! And I'm so excited for next Tuesday when I release our tarp surfing video! I have great plans with what that video will do on the "viral circuit". Time will tell :)

Also, just in case you haven't seen the bike video yet, you can check it out right below :)

Also, Entertainment Weekly did a cool article on the slip and slide/bike video, and they mention me as a director, which I thought was really sweet, you can check that out in the link below.

Entertainment Weekly Link
Posted by Devin Graham at 4:49 AM