I posted a video I shot in Kauai today, and within the first 12 hours I've gotten over 30 emails of people asking several different questions as far as how things were pulled off, camera settings, etc. This blog is in response to those ask questions.


For those of you who haven't seen the video yet, here it is.

1. With your glide cam how do you get the shots that are going over the cliff, and high up in the air, are you using any other equipment like a book stick or something? OR just holding it the whole time?
I am ONLY using the glidecam 4000 for all the shots in the video. I even use it as a tripod aswell, for the shots where the camera isn't even moving. I DO NOT use a vest, or harness, or anything of that nature.
For the shots where the camera goes over the waterfall the first 30 seconds into the film, and other similar shots... I personally am afraid of hights that big.. In fact that waterfall is 180 feet high, and anyone of any recent times that has jumped off it has died... So to get that shot, and any similar shot... I walk through it several times on my own, just to make sure I know the terrain (it was all rocky), then I walk through it slowly with the camera/glidecam several times to get the movement down, and then I film it 10-15 times just to make sure I get it right. This whole process on several of my shots can take anywhere between 1-15 minutes.

2. How do you get the camera to fly over the water, rocks, and sand so smooth?
I have been filming with the glidecam for the last 5-6 years now, almost every other day, which is no exaggeration. So a lot has come with experience. I didn't start out smooth, but anyone can make it smooth with time/practice. It's like riding a bike :) When I film on the sand, because you sink, I have learned to walk a certain way, (kinda looks funny, ha) that makes it so I can still have the glidecam work the same way as I was walking on flat cement. The same thing goes for walking over big rocks, I've just learned to walk on them and pace my self so the camera consistently stays smooth.

As far as the shots that fly over the water.. There is no fancy tricks about it, if it looks like we are flying over the water, that means I got wet filming it :)

For all the glidecam shots, I use a wide angle lens, 16mm is the focus length I normally use. That also gives us a much wider perspective, and makes us look like we are a lot higher then we are, just because of the lens perspective. I'm not holding the camera up higher then I normally wouldn, generally speaking anyways. I have never once put it on a pole or anything fancy like that. 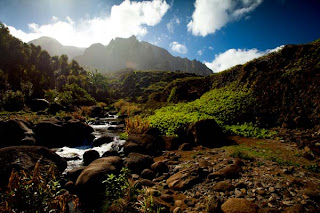 3. What camera do you use? And why?
I use the Canon 5D Mark II. I think without a doubt its the best camera quality out there for its money, and because i'm a photographer as well, it allows me to do that on the side :) Also, because the camera is super small, it allows me to be a one main film crew, and take it anywhere I go, and blend in with anyone else, as far as I'm not carrying around a big camera where I go.

4. How do you treat the footage you shoot? What do you do to it in post/editing?
I generally do nothing to it, except for some times raise the contrast a little. Almost 95 percent of the shots are exactly as they come out of camera. I try and shoot everything in camera how like it, just because I don't like to spend a lot of time coloring it later, because I don't have a ton of experience in that world. So in camera, I always set the white balance for sure. The shutter speed I try and get as slow/low as possible, ideally it would be 30, often times its to bright for that. And then I have a "picture style" I have set in the camera that gives me a "saturated look" that brings out the colors a lot more then typically what the camera would do.

5. Do you use any filters or effects in post to make your shots smooth?
Every video I do, it depends. For this Kauai video, I would say on about 10 percent of the shots that I filmed on a glidecam, I used a filter that comes with Final Cut called "smooth cam". It zooms into your image a little, and smooths it out. It works great, however, keep in mind that you must have shot it smooth first in order for it to work to begin with :)

There is an awesome blog online that shows different examples of picutre style settings, and how they effect everything, you can check out that blog, and video in the two links right below.

I hope that helps, please let me know if you all have any other questions, and I will do my best to answer them :)

-Devin
Posted by Devin Graham at 1:00 AM