So every so often I do what I call a "Passion Project". Basically it is exactly what it sounds like, me doing a project that I personally am super passionate/excited about, funding it myself because it's just something I really want to make! 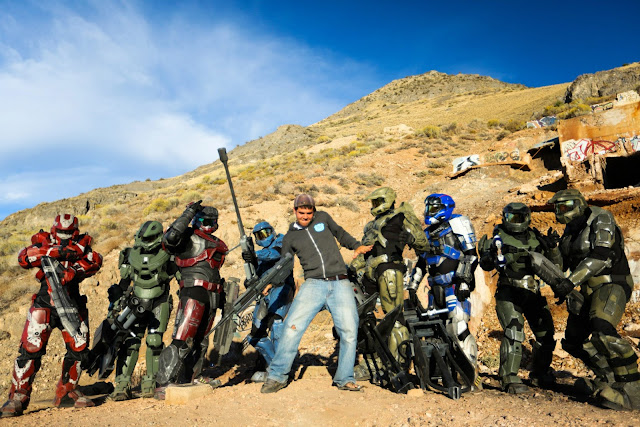 Soooo,  with that being said..... What most people don't realize is everything I make off of making videos for youtube, television, etc, I invest right back into my youtube channel, with the hopes of making bigger and better projects long term, it's me trying to prove myself to the world I guess, with the hopes that the "big guys" will see what I can do, and then they in turn help me get to the next level :)

That's exactly what this Halo First Person shooter video was, I took all my savings of what I have made, and invested it right back into this project. In hopes that it could show people what I could do on a very large scale :)

I have been the biggest fan of Halo the game since it first came out on Xbox back in the day! And I wanted to recreate as close as possible the video game experience, but in real life! So I contacted my friend Tim Winn, who makes AMAZING costumes, and he got a group together from around the US to help with the project. I ended up flying in 8 people total (the guys you see in the costumes), to all be a part of the project. And they ALL made the costumes they wore themselves! They were all huge fans as well, I guess you have to be if your gonna spend hundreds of hours on spartan costumes ;)

Even the guns you see in the video were all hand made as well. They range from rocket launchers, flame throwers, to rifles. And they are all super detailed, as if they came straight out of the video game!

That's what I love about making these videos!!! I get to work with super passionate people that love what they do! Everyone you saw in the video volunteered there time, they even took off work to be apart of this all. Yes, I paid for there flights and hotel rooms, but they were willing to sacrifice there time for the cause, and because I didn't have enough to cover hiring them, ha.

For this video itself, because it was costing a lot to fly everyone in, I wanted to make sure we got as much out of it as possible. So we actually shot two videos, in two days, the first one was a first person shooter, and the second video was a music video done to the Halo theme song.

For the first person shooter, I was hugely inspired by youtube star Freddiew's first person shooter video he did on Call of Duty, which is his most watched video with almost 25 million views. I had noticed that no one had ever done anything with Halo, in real life, as far as first person shooters go (I'm guessing because getting all the costumes is a feat within itself is why it hadn't been done), so I wanted to do my own take on the series.


Since I started making youtube videos, it has swalled almost 100 percent of my time and energy.... Which means I have no time anymore to play video games, so right before the shoot I had to remind myself of all the scenerios, so I had to play Halo online to remind me, haha. But I wanted this video to feel as close to the video game as possible, but in real life, I wanted to use a lot of the same scenerios you see online, seen in this video, such as "bad internet connections, lagging, people camping", etc. I wanted to use as many scenerios as possible that would connect with the mass audience that played Halo.

Also, this video was all planned around the launch of Halo 4 that just recently came out. I new that would help push the video that much further. Originally the plan was to release the video right before the game came out (we shot it one week before it's release), however the visual effects, and everything else took MUCH longer then expected to get right, so I had to sadly push back the release date a month to make sure we got it right. I figured since I had put my whole heart into it already, it would be much better long term to release the best video possible then something half complete.

So yes, there you have it, the behind the scenes story on how these projects happened!

Here's the behind the scenes video I just released that will show you the entire process it took to make the video happen.

What has been awesome about this project for me, is when I have showed people the almost final version, many people thought it was footage from the actual game, when in reality it was all real life, haha. So a big part of this video in my opinion is making sure people know all the work that went into it to make that "look" achieved. So I'll be releasing a huge behind the scenes video late tonight going over the entire process from everyone's responsibity on the project. And then later this week I'll be releasing the video.

As far as the Halo music video goes, that will be coming out later in January. The edit is totally done, we now have to get started on the visual effects.  And by me, I mean jared Moench, my friend who did all the visual effects :)

Also, one other final note I will add... There has been a ton of Halo games released, Halo 1-4, and Halo Reach. Each of them have there own look, slight adjustments on guns, etc. My take on this project was to not focus on recreating one of the games, but to combine them all in a mix, to make it still stay true to the Halo universe.

Other then that, I hope you all dig the video when it's released, and if not, for a project like this, because I invested so much into it, I would rather not know about it ;)

And for those not familar with the Halo universe, go ahead and watch the trailer for the latest Halo game.